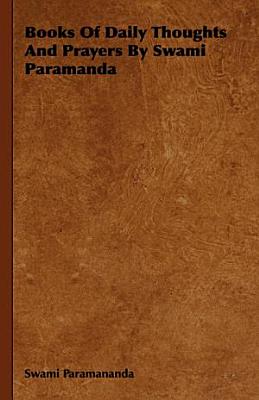 There are moments when the spirit is mute and powerless to give utterance to its interior yearning. It feels the need of a vibrant word to rouse it from its numbness and voice its voiceless aspiration. Hence attempts to provide, in one form or another, daily thoughts for the day's round are coincident with the rising of the religious consciousness. The ancient Forest-Books or Upanishads of the Vedlc period were but the accumulated effort of great sages to help those who surrounded them in their woodland hermitage, to meet the daily problem with triumphant heart. The mediaeval breviaries and manuals of devotion were written or compiled to the same end. The present volume is another contribution to this daily sacrament of prayer and holy thought. The idea of preparing it is not of recent conception. As far back as 1812 Swami Parama-nanda wrote me from Switzerland "Other day I was thinking a little of the next book (from your letters). Can't we call it A Book of Daily Thoughts and Prayers' ? What do you think of it ?" I had written to him that the idea had come to me to gather from his later letters and certain notes of his teaching material for a companion volume to the "Path of Devotion," made up from earlier letters. The prayers were caught with the same stealthy silent pencil at the moment of their utterance. They sound in consequence the more living note of spoken supplication. The quotations from the Scriptures are from the Swami's translations. Coming from such intimate sources, the words which follow possess special helpfulness in the intimate inward strivings of each day. They have been classified and arranged in consecutive and cumulative sequence. The thought is carried forward from day to day, so that at the end of a month a new and defined impression will be made on the character. Each day brings its salient thought to be held through the waking hours in continuous mindfulness a brief lesson amplifies this and imbeds it more deeply in the consciousness a prayer feeds and strengthens the natural upward-reaching devotional aspirations of the heart. A few lines from the Swami's sacred and illumined poems are given as a daily exercise in memorizing. Memorizing is one of the most productive of spiritual practices. It provides a rich inner library to which one can turn in the moment of emptiness or distress. A single line called up in memory will sometimes turn the thought into an entirely fresh and wholesome channel. Thus on each page will be found food for all the faculties of the aspiring spirit. The Swami's words lend themselves with peculiar aptitude to a work of this nature. His sentences have the focused, shining quality of a finely-cut gem which requires no embellishment of ornate setting. They stir the higher, holier impulses of the soul and impel to consecrated living. They carry forward by their inherent vitality and strength. The book calls for no other introduction than itself. With its tender counsel and ringing appeal it will find its way, by the force of its spiritual power, into the heart and sanctuary of every seeker whose hand it reaches. DEVAMATA. ANANDA-ASHRAMA, APRIL, 1926. JANUARY: LIVING CONSECRATION.. FEBRUARY: STEADFAST RESOLUTION "MARCH: POWER OF HOLINESS- APRIL: BLISS OF HIGHER VISION.. MAY: HUMILITY, SIMPLICITY AND PURITY OF HEABT. JUNE: FAITH AND COURAGE. JULY: ' BLESSING OF SERVICE- AUGUST: TRANQUILLITY AND CHEERFULNESS-SEPTEMBER: SELFLESS LOVE AND DEVOTION.. OCTOBER: RIGHT THOUGHT AND RIGHT ACTION. NOVEMBER: UNFALTEKING TRUST AND SURRENDER. DECEMBER: REDEEMING POWER WITHIN. 7 Be act offended if my mortal hand Lacketfe grace to offer Thee oblation. Yet this hand is Thy gift Sanctified by Thy touch. I will, use it humbly And lift this offering of love to Thy Feet. I will cherish my mind For it hath brought me thoughts of Thee I will cherish my heart For it hath given me vision of Thee And I will crown this life with a crown of bliss For it hath brought me to Thy gate.

Books of Daily Thoughts and Prayers by Swami Paramanda

Authors: Swami Paramananda
Categories: Religion
There are moments when the spirit is mute and powerless to give utterance to its interior yearning. It feels the need of a vibrant word to rouse it from its num

Book of Daily Thoughts and Prayers

Authors: Swami Paramananda
Categories:
There are moments when the spirit is mute and powerless to give utterance to its interior yearning. It feels the need of a vibrant word to rouse it from its num

Books of Daily Thoughts and Prayers by Swami Paramanda

Authors: Swami Paramananda
Categories: Religion
There are moments when the spirit is mute and powerless to give utterance to its interior yearning. It feels the need of a vibrant word to rouse it from its num

Fire in the Soul

Authors: Joan Borysenko
Categories: Psychology
The author of the New York Times bestseller Minding the Body, Mending the Mind reveals the power of spiritual optimism: a philosophy that sees life crises as op

A Bridge of Dreams

Authors: Sara A. Levinsky
Categories:
Paramananda (1884-1940), a disciple of Vivekananda in the Ramakrishna lineage, came to the United States in 1906. He was one of the first Eastern teachers to co

Message of the East

Authors:
Categories:
For more than 30 years, Yoga Journal has been helping readers achieve the balance and well-being they seek in their everyday lives. With every issue,Yoga Journa