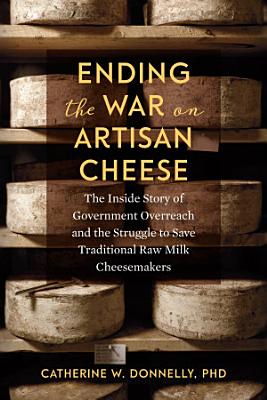 A prominent food scientist defends the use of raw milk in traditional artisan cheesemaking. Raw milk cheese--cheese made from unpasteurized milk--is an expansive category that includes some of Europe's most beloved traditional styles: Parmigiano Reggiano, Gruyère, and Comté, to name a few. In the United States, raw milk cheese forms the backbone of the resurgent artisan cheese industry, as consumers demand local, traditionally produced, and high-quality foods. Internationally award-winning artisan cheeses like Bayley Hazen Blue (Jasper Hill, VT) would have been unimaginable just forty years ago when American cheese meant Kraft Singles. Unfortunately the artisan cheese industry faces an existential regulatory threat. Over the past thirty years the US Food and Drug Administration (FDA) has edged toward an outright ban on raw milk cheeses. Their assault on traditional cheesemaking goes beyond a debate about raw milk safety; the FDA has also attempted to ban the use of wooden boards, the use of ash in cheese ripening, and has set stringent microbiological criteria that many artisan cheeses cannot meet. The David versus Goliath existence of small producers fighting crushing regulations is true in parts of Europe as well, where beloved creameries are going belly-up or being bought out because they can't comply with EU health ordinances. Centuries-old cheese styles like Fourme d'Ambert and Cantal are nearing extinction, leading Prince Charles to decry the "bacteriological correctness" of European regulators. The dirty secret is that Listeria and other bacterial outbreaks occur in pasteurized cheeses more often than in raw milk cheeses, and traditional processes like ash-ripening have been proven safe. In Ending the War on Artisan Cheese, Dr. Catherine Donnelly forcefully defends traditional cheesemaking, while exposing government actions in the United States and abroad designed to take away food choice under the false guise of food safety. This book is fundamentally about where and how our food is produced, the values we place on methods of food production, and how the roles of tradition, heritage, and quality often conflict with advertising, politics, and profits in influencing our food choices.

Ending the War on Artisan Cheese

Ending the War on Artisan Cheese

The Atlas of American Artisan Cheese

Authors: Jeffrey P. Roberts
Categories: Cooking
Presents 345 cheesemakers in the United States, with each profile describing the cheesemaker and its history, cheeses, location, and availability.

Authors: Gordon Edgar
Categories: Cooking
One of the oldest, most ubiquitous, and beloved cheeses in the world, the history of cheddar is a fascinating one. Over the years it has been transformed, from

The Oxford Companion to Cheese

Authors:
Categories: Cooking
Winner of the 2017 James Beard Award for Reference & Scholarship The discovery of cheese is a narrative at least 8,000 years old, dating back to the Neolithic e

Authors: Christina Tree
Categories: Travel
An all new guide to the scenic routes of Vermont Vermont is bigger than it looks. This may be one of the country’s smallest states but the more you drive here

The Oxford Encyclopedia of Food and Drink in America

Authors: Andrew Smith
Categories: Business & Economics
Home cooks and gourmets, chefs and restaurateurs, epicures, and simple food lovers of all stripes will delight in this smorgasbord of the history and culture of

The Oxford Companion to American Food and Drink

Authors: Andrew F. Smith
Categories: Cooking
A panoramic history of the culinary traditions, culture, and evolution of American food and drink features nearly one thousand entries, essays, and articles on