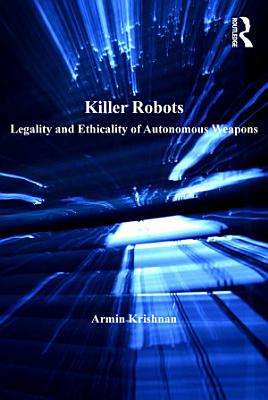 Military robots and other, potentially autonomous robotic systems such as unmanned combat air vehicles (UCAVs) and unmanned ground vehicles (UGVs) could soon be introduced to the battlefield. Look further into the future and we may see autonomous micro- and nanorobots armed and deployed in swarms of thousands or even millions. This growing automation of warfare may come to represent a major discontinuity in the history of warfare: humans will first be removed from the battlefield and may one day even be largely excluded from the decision cycle in future high-tech and high-speed robotic warfare. Although the current technological issues will no doubt be overcome, the greatest obstacles to automated weapons on the battlefield are likely to be legal and ethical concerns. Armin Krishnan explores the technological, legal and ethical issues connected to combat robotics, examining both the opportunities and limitations of autonomous weapons. He also proposes solutions to the future regulation of military robotics through international law.

Should We Ban Killer Robots?

Authors: Deane Baker
Categories: Philosophy
Images of killer robots are the stuff of science fiction – but also, increasingly, of scientific fact on the battlefield. Should we be worried, or is this a n

Sociable Robots and the Future of Social Relations

Authors: J. Seibt
Categories: Computers
The robotics industry is growing rapidly, and to a large extent the development of this market sector is due to the area of social robotics – the production o

Science Fiction and the Two Cultures

The Logic of Humanitarian Arms Control and Disarmament

Rule of the Robots

Authors: Martin Ford
Categories: Computers
In this sequel to his prescient New York Times bestseller Rise of the Robots, Martin Ford presents us with a striking vision of the very near future. He argues

A World with Robots

Authors: Maria Isabel Aldinhas Ferreira
Categories: Technology & Engineering
This book contains the Proceedings of the International Conference on Robot Ethics, held in Lisbon on October 23 and 24, 2015. The conference provided a multidi