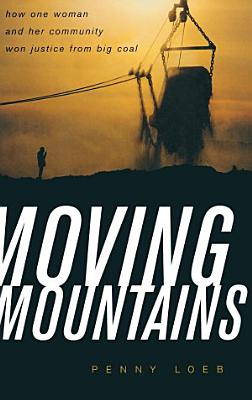 Deep in the heart of the southern West Virginia coalfields, one of the most important environmental and social empowerment battles in the nation has been waged for the past decade. Fought by a heroic woman struggling to save her tiny community through a landmark lawsuit, this battle, which led all the way to the halls of Congress, has implications for environmentally conscious people across the world. The story begins with Patricia Bragg in the tiny community of Pie. When a deep mine drained her neighbors' wells, Bragg heeded her grandmother's admonition to "fight for what you believe in" and led the battle to save their drinking water. Though she and her friends quickly convinced state mining officials to force the coal company to provide new wells, Bragg's fight had only just begun. Soon large-scale mining began on the mountains behind her beloved hollow. Fearing what the blasting off of mountaintops would do to the humble homes below, she joined a lawsuit being pursued by attorney Joe Lovett, the first case he had ever handled. In the case against the U.S. Army Corps of Engineers (Bragg v. Robertson), federal judge Charles Haden II shocked the coal industry by granting victory to Joe Lovett and Patricia Bragg and temporarily halting the practice of mountaintop removal. While Lovett battled in court, Bragg sought other ways to protect the resources and safety of coalfield communities, all the while recognizing that coal mining was the lifeblood of her community, even of her own family (her husband is a disabled miner). The years of Bragg v. Robertson bitterly divided the coalfields and left many bewildered by the legal wrangling. One of the state's largest mines shut down because of the case, leaving hardworking miners out of work, at least temporarily. Despite hurtful words from members of her church, Patricia Bragg battled on, making the two-hour trek to the legislature in Charleston, over and over, to ask for better controls on mine blasting. There Bragg and her friends won support from delegate Arley Johnson, himself a survivor of one of the coalfield's greatest disasters. Award-winning investigative journalist Penny Loeb spent nine years following the twists and turns of this remarkable story, giving voice both to citizens, like Patricia Bragg, and to those in the coal industry. Intertwined with court and statehouse battles is Patricia Bragg's own quiet triumph of graduating from college summa cum laude in her late thirtie and moving her family out of welfare and into prosperity and freedom from mining interests. Bragg's remarkable personal triumph and the victories won in Pie and other coalfield communities will surprise and inspire readers.

Authors: Penny loeb
Categories: Law
Deep in the heart of the southern West Virginia coalfields, one of the most important environmental and social empowerment battles in the nation has been waged

Authors: Anne-Christine D'Adesky
Categories: Medical
An award-winning journalist offers the only global analysis of AIDS treatment and prevention in countries from South Africa to China.

Authors: John Eldredge
Categories: Religion
Why Some Prayers Work, Why Some Don’t, and How You and God Can Change Things for Good How would it feel to enter into prayer with confidence and assurance—c

Authors: Andrea Dougherty
Categories: Religion
This is a book about God's Love and Healing as seen through the eyes of a stage four colon cancer survivor and fighter. Diagnosed in February of 2015 at the age

Authors: Jonathan K. Rice
Categories: History
The germ of this document began with two questions: how much does it take to supply aCivil War army(the Army of the Potomac has the best records so it is used a

Authors: Nicole Gaiziunas
Categories: Business & Economics
Every executive board would like to have the best in their field. Unfortunately, this undertaking has been failing extensively and categorically for years. Ever

Authors: Jan Hegelein
Categories: Religion
“The beauty of a word from God is that it ignites a passion within your spirit. It satisfies an underlying thirst you did not know you had and it births a fie

The Faith That Moves Mountains

Authors: Arisnel Mesidor
Categories: Self-Help
The Faith That Moves Mountains: How to Have It, How to Use It, and How to Protect It is a Christian nonfiction book consisting of a theological reflection on Ma

Authors: Florence Mutambanengwe
Categories: Reference
When I was a small child, my grandfather made whole family pray. I remember that some of the family members used to get tired of praying everyday. They would ru