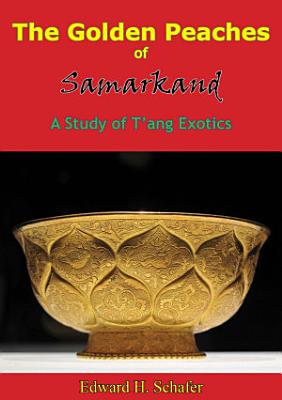 In the seventh century the kingdom of Samarkand sent formal gifts of fancy yellow peaches, large as goose eggs and with a color like gold, to the Chinese court at Ch’ang-an. What kind of fruit these golden peaches really were cannot now be guessed, but they have the glamour of mystery, and they symbolize all the exotic things longed for, and unknown things hoped for, by the people of the T’ang empire. This book examines the exotics imported into China during the T’ang Dynasty (A.D. 618-907), and depicts their influence on Chinese life. Into the land during the three centuries of T’ang came the natives of almost every nation of Asia, all bringing exotic wares either as gifts or as goods to be sold. Ivory, rare woods, drugs, diamonds, magicians, dancing girls—the author covers all classes of unusual imports, their places of origin, their lore, their effect on costume, dwellings, diet, and on painting, sculpture, music, and poetry. This book is not a statistical record of commercial imports and medieval trade, but rather a “humanistic essay, however material its subject matter.” “The most essential thing the reviewer can say about this book is, ‘Read it!’ It is probably the most informative, most scholarly, and most delightfully written book on China that has appeared in our time. It is a heartening reminder that scholars still have an interest in studying history in terms of people, in examining people’s intimate reactions to the little human things that occupied their daily lives.”—Jour. of Asian Studies “A pure delight....Scarcely any aspect of T’ang life is omitted, so that bit by bit Mr. Schafer builds up a reasonably complete picture of an entire civilization. Mr· Schafer writes with urbanity and wit.”—Sat. Rev. “A fascinating survey of T’ang culture as reflected in the use and demand for exotica....Rarely has the reviewer come upon a book so enjoyable and informative·”—Jour. of the American Oriental Society.

Authors: Edward H. Schafer
Categories: History
In the seventh century the kingdom of Samarkand sent formal gifts of fancy yellow peaches, large as goose eggs and with a color like gold, to the Chinese court

Authors: Edward H. Schafer
Categories: China
In the seventh century the kingdom of Samarkand sent formal gifts of fancy yellow peaches, large as goose eggs and with a color like gold, to the Chinese court

The Plum in the Golden Vase or, Chin P'ing Mei, Volume Four

Authors:
Categories: Fiction
This is the fourth and penultimate volume in David Roy's celebrated translation of one of the most famous and important novels in Chinese literature. The Plum i

Culture and Power in the Reconstitution of the Chinese Realm, 200–600

Authors: Scott Pearce
Categories: History
The period between the fall of the Han in 220 and the reunification of the Chinese realm in the late sixth century receives short shrift in most accounts of Chi

Authors: Frances Wood
Categories: Art
Covering five thousand years of history and delving deeply into the archives the British Museum and other famous collections of art and antiquities, this fascin

Authors: Insight Guides
Categories: Travel
Insight Guide The Silk Road is the complete illustrated guide to one of the world's ultimate travel adventures. Passing right through the heart of Asia, this an

Authors: Paul Copp
Categories: Religion
Whether chanted as devotional prayers, intoned against the dangers of the wilds, or invoked to heal the sick and bring ease to the dead, incantations were perva