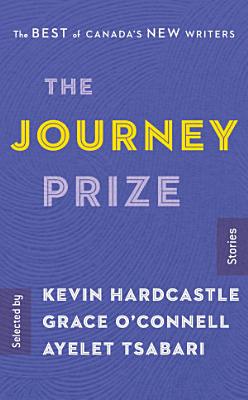 Like The O. Henry Prize Stories, The Pushcart Prize, and the Best American Short Stories series, The Journey Prize Stories is one of the most celebrated annual literary anthologies in North America. For almost 30 years, the anthology has consistently introduced readers to the next generation of great Canadian authors, a tradition that proudly continues with this latest edition. With settings ranging from wartime China to an island off the coast of British Columbia, the ten stories in this collection represent the year's best short fiction by some of our most exciting emerging voices. A young boy who believes he is being stalked by an unstoppable, malevolent entity discovers that he may not be the only one. In a sweeping story set against the fall of Shanghai during the Second Sino-Japanese War, a pregnant woman waits anxiously for her doctor husband to leave the city before it's too late. A river that runs through a First Nations community is the source of sustenance, escape, and tragedy for a girl and her family. The haunting footage of the politically motivated self-immolation has unexpected reverberations for a Tibetan-Canadian woman dealing with multiple conflicts in her own life. A man who works a back-breaking job at an industrial mat cleaning service is pushed to his limit. When her mother has to return to Kinshasa to bury a family member, a girl gradually learns of the intricacy and depth of grief, in an evocative piece that illuminates the cultural gaps common within immigrant families, and the power of food and stories to bridge them. The stories included in the anthology are contenders for the $10,000 Journey Prize, which is made possible by Pulitzer Prize-winning author James A. Michener's donation of Canadian royalties from his novel Journey, which McClelland & Stewart published in 1988. The 2017 winner will be announced by the Writers' Trust of Canada in November 2017.

Authors:
Categories: Fiction
Like The O. Henry Prize Stories, The Pushcart Prize, and the Best American Short Stories series, The Journey Prize Stories is one of the most celebrated annual

Authors: Wendy Jordan
Categories: Body, Mind & Spirit
"Embracing the End-of-Life Journey" is a sensitive and inspiring personal account of learning how to be fully present and comfortable with the time we have left

Authors: Hoover Liddell
Categories: Biography & Autobiography
This book is about the youth, schools, places, and ideas that significantly deepen my life. It examines insights, philosophies, and observations that I read, qu

Fuel for the Journey

The Transcription of Identities

Authors: Min Zhou
Categories: Literary Criticism
Based on a study of V. S. Naipaul's postcolonial writings, this book explores the process of postcolonial subjects' special route of identification. This enable

Authors: Lucy Peet
Categories: Education
An excellent, easy to use tool for those new to working with this early years age range, as well as more experienced practitioners.