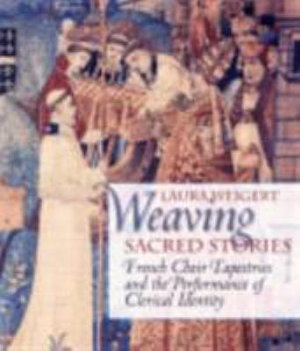 Spanning the backs of choir stalls above the heads of the canons and their officials, large-scale tapestries of saints' lives functioned as both architectural elements and pictorial narratives in the late Middle Ages. In an extensively illustrated book that features sixteen color plates, Laura Weigert examines the role of these tapestries in ritual performances. She situates individual tapestries within their architectural and ceremonial settings, arguing that the tapestries contributed to a process of storytelling in which the clerical elite of late medieval cities legitimated and defended their position in the social sphere.Weigert focuses on three of the most spectacular and little-studied tapestry series preserved from the fifteenth and early sixteenth centuries: Lives of Saints Piat and Eleutherius (Notre-Dame, Tournai), Life of Saint Steven (Saint-Steven, Auxerre [now Musée du Moyen Age, Paris]), and Life of Saints Gervasius and Protasius (Saint-Julien, Le Mans). Each of these tapestries, measuring over forty meters in length, included elements that have traditionally been defined as either lay or clerical. On the prescribed days when the tapestries were displayed, the liturgical performance for which they were the setting sought to merge the history and patron saint of the local community with the universal history of the Christian church. Weigert combines a detailed analysis of the narrative structure of individual images with a discussion of the particular social circumstances in which they were produced and perceived. Weaving Sacred Stories is thereby significant not only to the history of medieval art but also to art history and cultural studies in general.

Authors: Laura Weigert
Categories: Art
Spanning the backs of choir stalls above the heads of the canons and their officials, large-scale tapestries of saints' lives functioned as both architectural e

Authors: Andrea M. Heckman
Categories: Design
Andrea Heckman beautifully illustrates how the Quechua people of southern Peru tell their cultural stories in their textiles and use their weaving in centuries-

A Tale of Boxes

Authors: Robert T. Latham
Categories: Myth
Every one of us lives in a box. This box determines what we see and what we do not see. It tells us who to love and hate. What to fight for. How to live. Who we

Authors: DK
Categories: Juvenile Fiction
From lightning-wielding Zeus, the supreme Greek god, to protective Hathor, the Egyptian goddess of love - heroes, gods, and monsters are brought to life in thes

Authors: Robin Netherton
Categories: Design
The study of medieval clothing and textiles reveals much about the history of our material culture, as well as social, economic and cultural history as a whole.

Authors: Tina Kane
Categories: History
First English translation of a late fifteenth century manuscript containing instructions for designing a medieval tapestry - the only such to survive.

Contamination and Purity in Early Modern Art and Architecture

Authors: Daniel M. Zolli
Categories: Architecture
The concepts of purity and contamination preoccupied early modern Europeans fundamentally, structuring virtually every aspect of their lives, not least how they

The Bayeux Tapestry and Its Contexts

Authors: Elizabeth Carson Pastan
Categories: Art
A full and provocative reappraisal of the Bayeux "Tapestry", its origins, design and patronage.

Henry VIII and the Art of Majesty